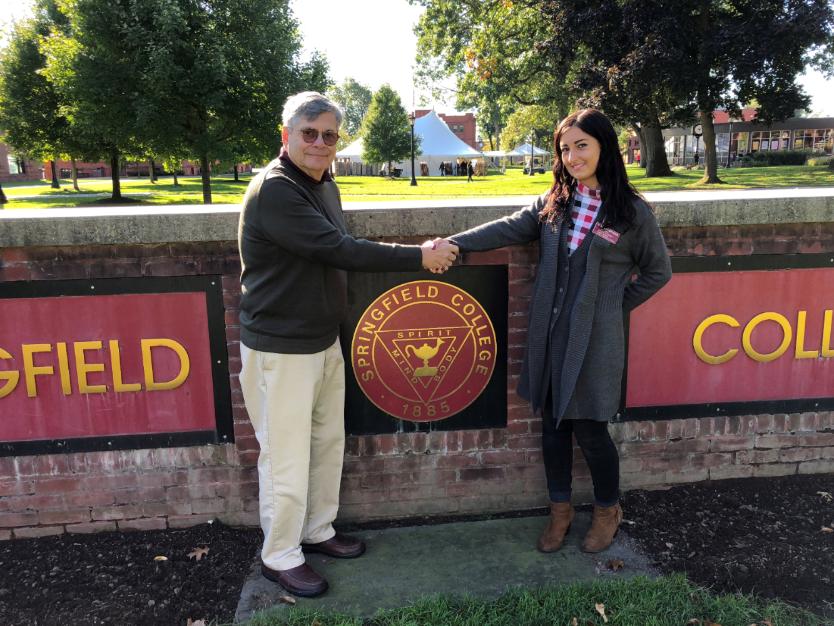 Charisse is now attending Springfield College as a PhD candidate in Psychology. She has found herself quite busy while at Springfield, enrolling in six courses while working as a Graduate Associate to both the Office of Multicultural Affairs and the Center for Service and Leadership, where she is responsible for coordinating an after-school program at Elias Brookings Elementary School in Springfield, MA. She is also a member of the Trauma and Prevention Research Lab in the Psychology Department. She chose Springfield College to pursue her Doctorate in Psychology because of the unique opportunities she will have here to do progressive community work, while developing her skills as a Psychologist.

For so many of us, who we become is partially rooted in the experiences we undergo at an early age. When Charisse was 13 years old she began working on a horse farm in her home town. In this role, she observed the healing power of the nonverbal relationship between humans and animals. Even at this early an age Charisse was interested in learning more about mental health and became fascinated by the relationships between humans, institutions, systems, and cultures. She set out as her goal to study Animal Behavior and Cognition and ultimately understand the processes involved in animal assisted therapy. Charisse chose Hampshire because they offered a rich animal behavior program and she was very interested in experiential learning.

While Hampshire offered a supportive environment, college was not an easy adjustment for Charisse in the beginning. She quickly learned that many of her fellow students had attended private secondary schools and came from affluent and well-educated families. As a young woman from a blue-collar Italo American household, she wondered how she would fit into her new surroundings, particularly since she was the first generation of her family to attend college.

With the encouragement from Hampshire to explore her academic interests, Charisse eventually developed a curriculum around anthropology and psychology and researched the manifestations and causes of mental illness cross culturally, with an emphasis on decolonizing and de-westernizing methods of healing. In her final year at Hampshire, she independently completed a research study on the relationship between American individualism, ethnic group attachment, and emotion regulation, where she found emotion regulation to be negatively impacted by American individualism, and a protective effect in ethnic group attachment.

While at Hampshire, Charisse worked as a Resident Advisor for three years, co-founded and competed on the Hampshire College Equestrian Team, belonged to the Education Policy Committee as a student representative, volunteered in the Cooley Dickinson Emergency room and at Safe Passage, organized the Queer, Gender, and Sexuality Conference and Sexual Assault Activism Month, received the Student Ingenuity Award twice, and completed an internship with the Department of Public Health. Upon the conclusion of her fourth year, Charisse was honored to be selected to give a speech with her best friend at Hampshire’s Commencement ceremony.

After graduation, Charisse worked as a Mental Health Recovery Counselor while applying to graduate school. Although she enjoyed her role as a counselor and felt fulfilled working with people towards their personalized recovery goals, she also desired to continue her research and strengthen her clinical and counseling skills. She sought a program where she could continue to explore the relationships between psychology, identity, and culture. Springfield College provided that opportunity.

Looking back from where she started to where she is today, Charisse recognizes the achievements she has produced would not be possible if not for the help of others. As she stated to me during our interview, “I am thrilled to be in school again and am very grateful to my supporters who have made this possible”.